My last couple reviews have been more, let’s say, tough.

There hasn’t been a substantial storyline yet. I want this show to work, but it has to put in the effort. The episodes have been done to death. For example, do you remember that episode of The Office when Micheal crashes Jim’s party, and no one wants him there, but doesn’t say anything? Yeah, that was basically this week’s episode of The Muppets.

I expected a lot from our fuzzy friends. At first I wasn’t sure how to take The Muppets new edginess.  But if they could make it work, then I was all for it. You can tell subtle jokes with sexual undertones or drug references, but more importantly, give me a story. Maybe they should take a page from Dan Harmon (Community, Rick and Morty), who can be funny and quite earnest at the same time, while still making you laugh. 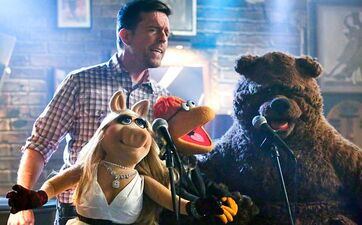 No, this week, will not be as harsh as the last week, but it’s still more of a B minus story line. I think I am generous because Ed Helms (The Office, Vacation) stopped by this week. When Piggy learns that the gang is going out for drinks after work, and she is not invited, she employs her favorite frog (Kermit) to get her invited. When out with the crew, the party is dead until Ed Helms shows up and the dull night turns into the most momentous night ever. However, things aren’t all that swell for Kermit, when at the studio the next day, his staff doesn’t show up for work. Meanwhile, Fozzie has a freak accident, injuring a guest.

So what made this episode better than last week’s? It was literally just the one exceptional karaoke sequence with Ed Helms.  I was left laughing and singing along at the same time. What was also different was the fact that it was bad singing. The Muppets, who are usually musically inclined, sang just as poorly as…well…us. Granted they found themselves drinking irresponsibility, it was still quite entertaining to watch.

Also, we got to watch Sam the Eagle pine over Janice of Electric Mayhem. This is a new development and adds a new potential love interest story line. Fozzie had his own story, but it took more of a backseat compared to previous episodes. Kermit is developing further into an unrecognizable version of himself. While Piggy is done right, Kermit seems to be falling into a more active rather than reactive character. I guess being the producer of a late night TV show will turn you into something you are not.

I am still awaiting a fresh take on the office-mockumentary-style-TV show. The writers haven’t been able to produce a new take on this. Everything they have done as been done on other shows. I feel confident once the show runner secures a safe place for the Muppets, we will start to see more risks taken. Until then, what we will continue to get is a show that is more about quick witted jokes, amusement, and hand-me-down narratives.

If nothing else, watch this episode just for the Karaoke scene, because you will not be disappointed.  This week, there was further character development through unique situations. Overall, the episode was relatively delightful. At this point, you aren’t watching for a story but just to chuckle a little bit. If you didn’t get my warning before, I would encourage all parents with young children to not let their kids watch this particular episode because of the excessive drinking scene.

Oscars 2015: Recapping the winners and highlights

February 23, 2015 Brandon Vera Comments Off on Oscars 2015: Recapping the winners and highlights